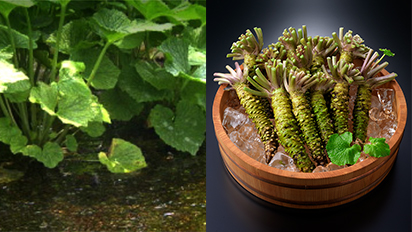 Wasabi has grown wild in Japan’s mountainous regions since ancient times, and has been a part of Japanese life for centuries. Wasabi was noted in Japan as far back as the 10th century according to ancient records. During that time it is believed that wasabi was used both as food and medicine.
Grated wasabi that is used with sushi or sashimi is shaved from the fat, gnarled root of the wasabi plant. Japanese eat the stalks, leaves and flowers of wasabi as well. Stalks and leaves are typically pickled, and also chopped and served as a topping for vegetable dishes and soups.
Because the plant is so delicate and can only grow under certain conditions, in relatively cold, clear mountain streams and in a north-facing environment with fairly stable weather conditions year-round, it is still considered a precious commodity among spices.

There are 2 plants used as Wasabi in Japan, Wasabi Japonica and Horseradish.
Wasabi Japonica has grown wild in Japan, and they are two varieties, sawa (mountain stream) wasabi, which grows in shallow, clear-flowing water and oka (land) or hata (field) wasabi, which grows in soil. Though grown in slightly different environments, there is no difference in quality between the two. Field-cultivated wasabi is easier to produce in large quantities, and the successful field cultivation is one of the reasons that tube wasabi is now gaining popularity worldwide. The roots, stalks and leaves parts of wasabi plant are used as main ingredients for wasabi products.
Horseradish, which is used to make a condiment for meat dishes like roast beef or steak, is originated from Europe and has cultivated in mainly Hokkaido or grown wild in wetlands along rivers. Horseradish is called as Western wasabi or Wasabi radish and has been used as an ingredient for wasabi products.

The spiciness experienced when eating chili pepper or black pepper is often described as painful. This is because spicy components suchas capsaicin or piperine generate the feeling of heat by stimulating pain receptors in the tongue and mouth. Wasabi is different in that its spicy components travel from the mouth through the nasal passages, stimulating the mucous membranes. Japanese express the vibrant tingle wasabi produces as it escapes the nose with a word “tsuun”, which describes wasabi’s short, sharp and powerful kick!
Allyl mustard oil is responsible for wasabi’s effect on the nose, but is not present in wasabi until the root is grated. Grating breaks down wasabi’s cellular structure, and activate an enzyme called myrosinase. This enzyme reaction breaks down mustard oil glycosides in the wasabi to produce allyl mustard oil.

Traditional way to use wasabi in Japan

Wasabi is an essential accompaniment to these raw fish dishes. Wasabi’s punch counters the scent of raw fish and compliments its flavor with a light, fresh taste. It is also thought to have antibacterial properties. 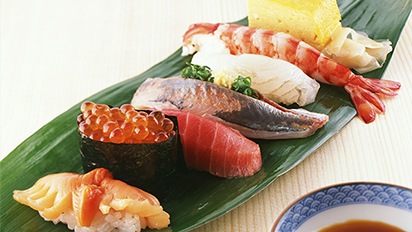 Sushi is one of the most distinctive Japanese cuisine and is becoming popular around the world. The use of wasabi in combination with sushi began early in the 19th century. By the mid-1800s sushi chefs were adding wasabi to sushi in Edo (now Tokyo), where was the birthplace of current nigiri sushi. This type of sushi spread and made wasabi as popular as sushi itself. 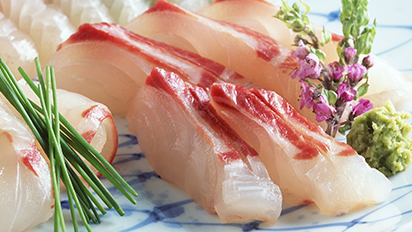 Sashimi is a staple of the Japanese diet and it is almost never eaten without wasabi. People probably began using wasabi as a condiment for sashimi during the middle of the Muromachi period (1338 – 1573). Today’s common practice of using a combination of soy sauce and wasabi to eat sashimi is believed to have started late in the Edo period (1603 – 1868).

Two most popular ways to enjoy sashimi and wasabi 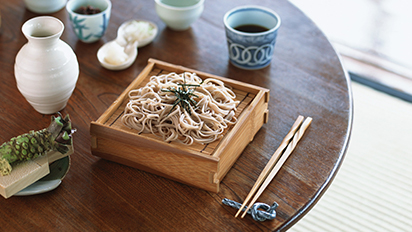 Another meal that typically features wasabi is cold soba noodles. The combination of wasabi and soba can be traced to the Azuchi-Momoyama period of 1573 – 1603. . An encyclopedia published in 1712 described wasabi as an essential condiment for soba, indicating that Japanese were eating them together by the Edo period of 1603 – 1868.

Wasabi also goes well with many other foods and can be used just like common Japanese flavorings such as miso and soy sauce. It is good with meats, vegetables, bread, spaghetti and even desserts.